For several months now I have been guiding meditations at the Mashpee Council on Aging.  During these drop-in sessions, I’ve met thoughtful people, enjoyed deep conversations, and meditated with an engaged group. The other day I tried out three new meditations. 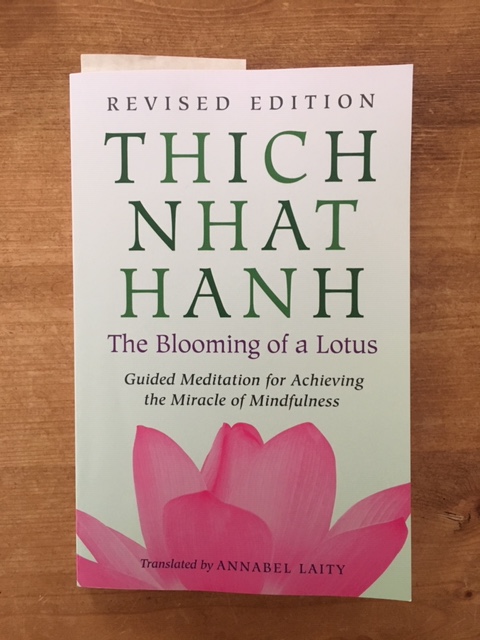 This book contains meditation exercises by renowned Vietnamese Zen monk Thich Nhat Hanh.  The first set of exercises involve a repeated phrase, which helps one to focus on the breath.  The person guiding starts by reading the entire 2-part phrase.

Breathing in, I feel calm.
Breathing out, I feel ease.

Hanh’s point is that focusing on the breath allows us to ignore the distractions of thoughts or sensations that invariably pop up while meditating.  A brief sample of other phrases follow:

Breathing in, I smile.
Breathing out, I release.

I found this meditation grounded me more firmly in the moment.  I was able to easily focus on the key words … calm, ease, deep, smile; each one a simple and powerful concept.

That Tuesday was sunny and pleasant with very low humidity.  So, the group was open to move outside to the patio area behind the center.  After a brief intro, we spread out moving slowly.  We must have looked like a group of kind zombies…taking in the sights, sounds, smells and feelings from the breezy day.  I observed flowers, trees, berries and then noticed a patchwork of bricks memorializing individuals.

I decided to pick out one brick to focus on and my eyes settled upon this one. 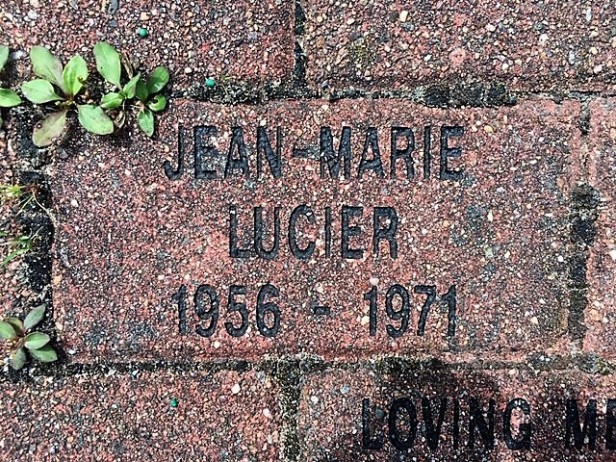 I found myself reflecting upon the life of Jean-Marie Lucier, the 15 year-old girl who died the year before I graduated from high school. I wondered what her short life was like. Not so much how she died, but instead I wanted to know who she met during her life; who she was influenced by and who she influenced. Was she a serious student or a playful person. Was she a book reader or a lover of nature. Or perhaps some part of the above, all of the above or none of the above.

A common meditation I like to do is the Four Elements, which asks the meditator to contemplate the embodiment of earth (solidity), wind (air), fire (passion) and water (fluidity).  However, I recently came across a Six Element meditation which includes the elements of space and consciousness.  For our last meditation that day, I focused on these two elements.

These meditations are more cerebral and not everyone in the session enjoyed this because they require more verbal explanation.  However, those that did felt it deepened their meditative experience.  One meditator felt she was floating outside her body while contemplating the space element.  Another was reminded of a dear friend who recently passed during the consciousness meditation.  She could sense her friend’s spirit among us, present in her consciousness.

Space
The space element asks us to focus on the infinite quality of space.  Sitting with the eyes closed focused on space, one may lose the optical delineation between inner and outer, the hands may no longer have five fingers, and may become a mass of sensations – tingling, warmth, pressure.  The sounds that arise, are they inside or outside of me.  Even while sitting still, I am moving.  The planet is spinning on its axis, revolving around the sun, the entire solar system hurtling through space.

Sources:
The Blooming of a Lotus by Thich Nhat Hanh.
The material on space and consciousness is attributed to the author, Bodhipaksa.  It can be found in its entirety at https://www.wildmind.org/six-elements

4 thoughts on “Meditating in Mashpee”